As you may have realized, this command simply makes Miki say "hello world". There's nothing else happening. You may add it to your server like this:

Variables let you store a value, and then use it later. You define them with var and give it any name you want. For example:

This will create a variable called mynumber with a value of 5. It will then multiply it by 2 and send it:

You can add a value to your text by putting it inside $[]. For example:

Also, Miki will provide a few global variables you can use, such as author, guild, channel and message. These have information about how the command was used. Consider this example:

If the user Veld used this command, it would send:

You are able to send different responses under different conditions. For example:

The person using your command may include additional information. This is accessible through the global variable args.

Imagine we have a command /age, and its code is as follows:

If your user types /age 20, Miki will say You are 20 years old However, if the user doesn't enter any args, its value will be empty. You may want to check like this:

The length in this case is the amount of arguments (which were separated by spaces), as args is in fact a list. More on lists later.

It is also possible to send embeds with MiScript. You may even use them in /levelupmessage. For example: 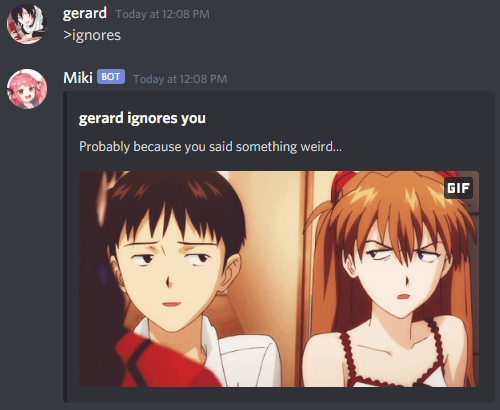 There are more functions like .footer("Text") and .color("red") for the embed builder; check out the API reference for embeds.

In the "hello world" example, you saw how to add a command with a script to your server. However, sometimes your command consists of multiple lines, which currently can't be sent properly in a Discord slash command. In this case, you may chain lines together, and use ; between each statement. Or you may use the non-slash command, like this:

Notice the dark background behind the code. This is a code block, and you may use it by putting triple backticks ``` at the start and end of your code. It is optional, but it makes it look more organized.

The following sections will go in depth on what MiScript can do. This can be overwhelming when you're new to programming. If you need help, feel free to join our Discord Server and ask for help in the #miscript channel.

When you want to execute code multiple times, you can create a function.

The following code creates a function in MiScript:

Let's go through this script:

Now that we defined the function "greet", we can call it:

Using functions, we can run code many times without having to copy and paste it. There is no "loop" statement in MiScript, but you may .map over a range of numbers or a list of values. For example:

Sometimes you don't want to define a whole function, just run a single line of code. This is possible with arrow functions.
Consider this example that takes a list of strings (text), and then converts every value into uppercase:

Let's go through the arrow function:

When you execute the code, the result will be: ["HELLO", "MIKI"]. You will have to use say to send it though.

Lists are used to store multiple values in a single variable. Normally, you would try to do this:

You can see how the amount of variables will pile up if we add more users, and there is no easy way to get all the users at once. The solution is to use a list.

A list starts with [ and ends with ]. So an empty list would be [].
To create an list with a string, you place the string between the brackets: [ "value" ].
To add multiple strings, you add them separated with commas within the brackets: [ "Veld", "Gerard", "Zephy"].

There are several useful functions for lists, such as .map() which we saw before.
We can join these users together with .join():

Since there is a message limit on Discord, using if and else over and over again is not a good idea for bigger commands. Using stop will stop the script and won't execute the rest of the code.

When a script is finished, all the variables you have defined will be lost. To save a value, you can use the storage API.

⚠ Warning: The storage API is not infallible; it's rarely possible that your data will be lost. We will work to prevent this from happening.

Let's create a command that remembers how many times the command was executed. First, decide a unique key that you'll use in the storage, in this example we'll be using "count".

To store a value in the storage, you can use storage.set().

To retrieve a value from the storage, you can use storage.get().
When a key doesn't exist in the storage, the result will be null.

Let's make a command that counts how many times it was executed.

First, we retrieve the value from the storage because it's possible that the command was executed before. When it doesn't exist, we set the count to 0.

Now we increment the value by 1, store it back to the storage and say the result:

When executing the command multiple times, you'll see that the counter increases: 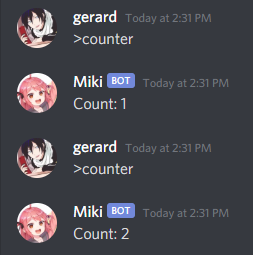 To see what data is stored in the storage, you can use the command /customcommand getstorage: 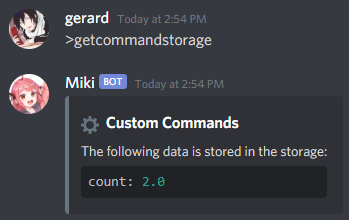 To prevent abuse of the storage API, it has a key and value limit. To increase the amount of data, The owner of the Discord Server (where the command is being executed) can donate to get additional keys.

The following section covers what the API can do in MiScript.

Grow your community with Miki through level ups, experience, currency, and rewards