So, looking to configure some roles in your server? Great! This guide will explain each command involved in configuring and obtaining roles using Miki, as well as go through some Discord features such as setting up permissions within your server. After reading this, you will have the necessary knowledge to set up a variety of different role configurations and know how to opt in or out of available roles. Before we start; make sure you already have Miki in your Discord server if you’d like to follow along and try things out for yourself!

In this guide we will be showing you

Before we get into configuring roles, let’s take a look at all of the commands you’ll need to know beforehand!

To configure a role, use the /roleconfig slash command. See below for options.

Once the role is configured as optable, it will appear on the /iamlist with its requirement displayed in the form of emotes. This role displays no emotes because it has no requirements.

Now that the role is optable, it can be gained using /iam [role_name]

Before a role can be configured, it needs to be created first. To create roles within your server you have to navigate to the role tab within the server settings, here you will be able to create new roles and edit any existing roles.

Permissions are used within a discord server to give members or bots access to certain features. permissions are given to people through roles, each role can have a different set of permissions, however if a user has multiple roles their permissions will be inherited from their highest role.

Miki needs the "Manage Roles" permission in order to access the Discord servers roles. You can give Miki access to this permission by navigating to Miki’s role in server settings and enabling 'Manage Roles'. The 'Manage Roles' permission will only give Miki authority to manage roles underneath her role in the role hierarchy, therefore any roles you intend to configure will need to be below her role, you can drag roles up or down the hierarchy to change their position.

Now you're ready to configure some roles! Let's take a look at the commands associated with role management and the different arguments available to use when configuring roles.

There are multiple ways you can configure a role, each of these arguments will change the way the role is obtained by your members.

Even though you’re completely free to use Miki and her role system; we would like to give you some inspiration of what you can do with these role configurations!

This role configuration will make it so that whenever a user reaches level 5 on your Discord server, they will get the specific role! This can be used to reward users that are being active, and whenever they level up to the required level, Miki will automatically give this role to the user. 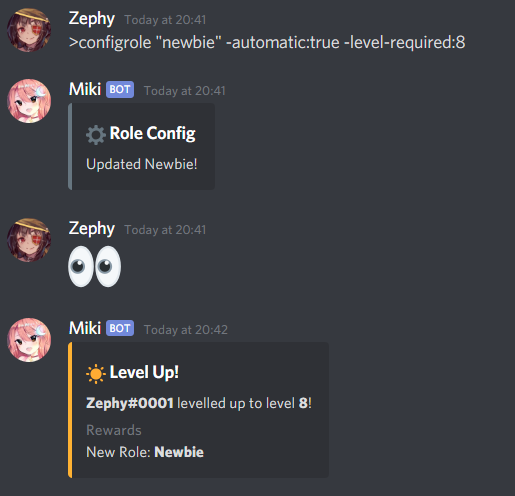 This is a very common, and easy way to freely create roles that can be obtained by anyone. This is super easy to use for roles such as hobbies, colours, and similar kinds of roles.

What Optable does is allow people to use this role in /iam and /iamnot, and they will appear in the /iamlist. This is mostly for commands that people should be free to take or not, whichever they want. 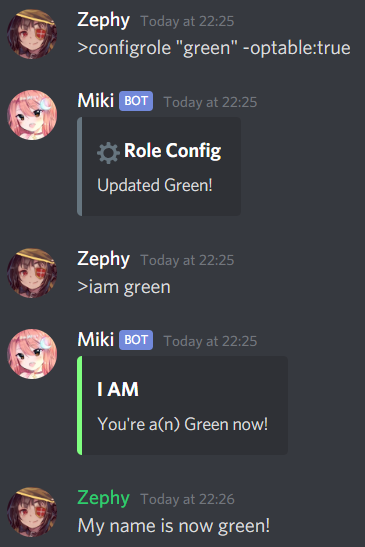 If you’re a creator on Twitch, Patreon, etc. Miki can allow your supporters to have special roles. This can be super convenient, because on occasion you might want to have users have extra rewards on your server, but still have them pick between different ones.

For example, you can have default colours which your Discord members can freely choose, and then for supporters; you can have prettier, hand-picked colours, to let them brag in the chat. We hope this guide has helped you use Miki’s role system to set up some roles for you and your members to use! Still have some questions? Why not join our discord server, we have an amazing community of Miki users to meet and our staff would be happy to answer any questions!

Grow your community with Miki through level ups, experience, currency, and rewards